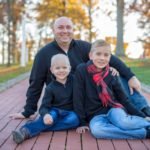 Chad is a Captain at Cumberland Trail Fire District #4 in St. Clairsville. He was hired full-time in October of 1998 and obtained his medic in September of 2002. He was previously a lieutenant and held the office of Vice President and also President in L3667. His interest in peer support came from both work and personal experiences in his life and he has been involved in the peer support team since its inception. Professionally, in January of 2012, Chad's Lieutenant and very good friend committed suicide. Then, in December of 2013, the Chief of the Department had also committed suicide. For a small department, this was a very large loss. Personally, Chad's youngest son was diagnosed with Leukemia in April of 2016. Leo was 6 years old at the time and endured 3 ½ years of treatment. Leo has been done with treatment since June 9, 2019, and is now in remission, and is a happy and healthy kid. Chad is married to Natalie (2006) and they have two sons together, Nolan and Leo. Chad obtained his Associates Degree thanks to the OAPFF Higher Learning Initiative and is very active with all of his son's activities. Chad would like his brothers and sisters to know that we have very experienced team members and many on the team have undergone the same things you may be facing. He wants to be sure that they know help is available if needed.